In April 1995 the JAIC published the "PART-Report covering technical issues on the capsizing on 28 September 1994 in the Baltic Sea of the ro-ro passenger vessel MV Estonia" which included also certain picture material, among others the picture below showing the aft part of the visor bottom with the visor lug being part of the Atlantic lock. 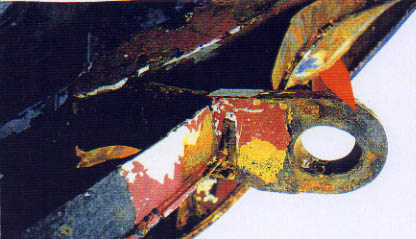 The blue coloured part of the lug - see arrow - looked as if having been exposed to heat which was unusual since this part had been below water. The JAIC was contacted and it turned out that samples had been taken already on 25 November 1994 and had been examined upon request of the Central Criminal Police in Finland and Kari Lethola as chairman of the Finnish part of the JAIC on 30.03.95. The tests were carried out on 30.05.95 by the Criminal Laboratory Technical Division, Helsinki. The "available" documentation was received - already translated into English - from Kari Lethola.

(1) A request for testing of 4 samples taken on 25.11.94 to find out whether there were traces of explosives in the samples. The request was made in Swedish language on a printed Swedish form by Kari Lethola. The document with translation is attached as Enclosure 31.392.

(2) The results of the requested tests translated from Finnish to Swedish to English which is attached as Enclosure 31.393.

(3) The request for and the results of testing samples 5.-9. translated from Finnish to Swedish to English which is attached as Enclosure 31.394.

What they are supposed to find out:
Is there rest of explosive materials, substances in the samples 1-4?
Samples were taken on 25 Nov 1994.
signed 30.03.1995
Senior Criminal Constable Jan Storing asking for this.«

Note: It is unclear what exactly should be tested. Presumably these were the parts that were cut off from the visor around the openings where the lugs of the hydraulic sidelocks had been since these are apparently the only parts cut off soon after the recovery of the visor.

Show remains of explosives aimed for civilian use with blasting works or of the most normal military explosives have not been found in the samples 1-4. They have not either found anything that indicates anything of self-made explosives in the tests.

Note: It is obvious that such a surface test would result in nothing because the samples had been under water for almost 7 weeks. Since the investigation of the TWA 800 crash it is public knowledge that explosives cannot be traced by means of the methods applied by the laboratory when the objects have been under water for more than one week. It would, even today and in 20 years time, be possible to prove explosion damage by scientific methods by means of which the destroyed molecular structure is examined. This, however, was not done according to the available documents.

Is there any strange paint in the samples 5. to 7.?

Result of the investigations

In the samples 5. and 6. there were paint splinters consisting of between 10 and 20 layers of colour. The white layer of paint that constituted the top layer on both the paint samples seems to be intact and some rubbings of strange paint could not be observed.
In sample No. 7 were paint splinters with paint layer structure that was different from the bow mentioned because lots of grey and blue epox paint had been rubbed on the top white paint layer. This epox paint was when it comes to the pigment and the component type to its chemical structure of the same type as the Inerta 160 epox colour, that had been manufactured in the laboratory from the samples 8. and 9.«

The results are self-explanatory and need no further comment.
These are the only known activities in connection with explosives which were incurred by the Authorities involved in the casualty investigation.

No further information relating to explosives having possibly been on board the ESTONIA on her last voyage were received until approximately mid 1996 when rumours were circulating that there was a big hole in the starboard side of the hull in way of sauna and swimming pool compartments on 0-deck. The information came at first from some source in the upper middle management of Sjöfartsverket. A check of the available video material - see Chapters 25-28 - revealed that the respective parts on all video tapes had been cut out - see Subchapter 34.6 - Disengage Report. A review of the statements of the survivors from the 1st deck having been rather close to the area in question did not allow definite conclusions until it was possible to talk to one of them personally. This was Carl Övberg - see Enclosure 12.4.2.151 and Subchapter 12.4.2 - who explained among other things that he saw water escaping under high pressure from the goose-necks fitted to two ventilation pipes coming up from 0-deck. He made this observation about 1 minute after the 3rd and most most heavy shock, vibration of the vessel but about 30 seconds before the big heel to starboard. This allows the conclusion that at least the 0-deck compartment directly below Carl Övberg must have been flooded and under pressure.This indicated a connection to the outside, i.e. a hole in the hull, in way of 0-deck as otherwise the compartment could not have been under pressure.

This scenario was among other things also presented at the first and second exhibition organised by this 'Group of Experts' in Stockholm in June and December 1997 when the complete investigation results were presented to the national and international public and media. Among the many pieces of information received during these exhibitions there were also explanations regarding possible explosions on board.

After a relatively silent 1998 when most of the interested people were analysing and subsequently criticising the report of the JAIC a new person appeared in Sweden apparently with sufficient time, and an undisturbed mind, to analyse again all the publicly available video footage and documentation on this subject collected by the JAIC. He found among other things on the video B40b, made by the SPRINT ROV on 03.12.94, a package on the port superstructure in way of the 5th deck which appeared suspicious to him. Video images were made and shown among others also to experts in explosives in Sweden and Germany. See the following image. 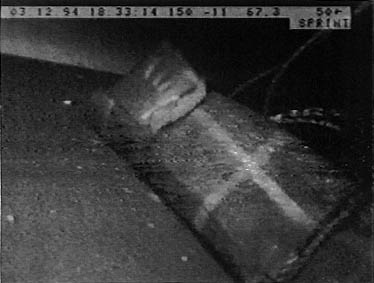 Both identified the package with about 90% certainty to be an explosive charge used underwater.
Evaluation of the footage made by ROV on 02. and 09.10.94 revealed, however, that the package had not been at the identified location on the 5th deck on these dates, thus must have been placed there between the 09.10. and 03.12.94 and therefore could not be casualty related.
In any event, the term "explosives", which had always been in the background during the preceding years of the investigation, was suddenly brought back to the attention of the investigators and the video footage available in Hamburg, all obtained from the JAIC, was analysed again also in an attempt to find possible explanations for numerous so far unexplained damage areas. It revealed among other things that an orange coloured cube had been attached to the recess of the port front bulkhead of the wreck in way of the hydraulic and manual side locks and the fastening of the bow ramp actuator.

The cube was clearly visible and had been closely looked at by the ROV during the inspection on 09.10.94, it could not, however, be found on the 02.10.94 videos which was possibly due to restricted visibility and was definitely not in this location on the SPRINT ROV made on 03.12.94 respectively on the diver video of the same date.
Images were made from the orange coloured cube and identified by all three experts from Sweden, England and Germany with a high degree of probability as an "explosive charge". See the following two images. 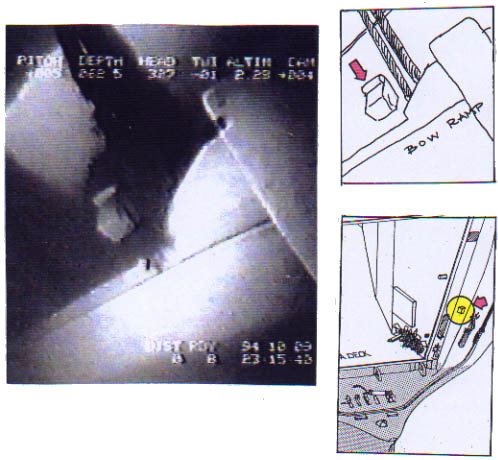 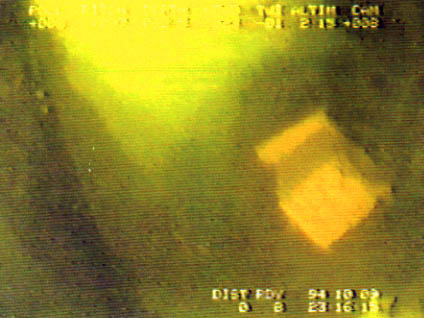 As this charge attached in way of a very sensitive area - the port side locking devices of the visor and the fastening of the port bow ramp actuator - obviously did not explode, the corresponding area of the starboard side was analysed for possible explosion damage which was positively identified by the underwater explosive expert Brian Braidwood. This resulted in a further analysis of the available video footage all received from the JAIC. The results are outlined in the following subchapters.