While the ferry was sinking in completely upside down condition the stern area had the first contact with the sea bottom. The bow was still above sea level at this time with the bulbous bow being the highest point. See the drawing below.

As the superstructure in way of the port side aft part of the 8th and 7th decks were found to be indented and bulged by the divers it has to be assumed that she was somewhat more heeled to port when touching the sea bottom as a result of which the above indentations were caused. 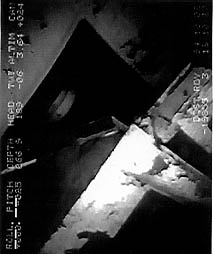 The ROV tape made on 02.10.94 indicates that the starboard stern ramp is slightly open as can be seen on the adjacent image. It shows the upper inner side. The explanation for this slight opening was given already in Subchapter 21.3.3 by the statement of Rolf Sörman - see Enclosure 21.3.3.335.1 - who, as well as his seminar colleagues, were disturbed to such extent by hydraulic noises that they gave up their conference at 21.45 hours ET.

As the 2nd main hydraulic station was located at the starboard side aft on the car deck level directly below the conference area this is the only installation able to produce the explained disturbing noise level. It can furthermore be reasonably assumed that the hydraulic pumps had been started and kept running to open the starboard stern ramp slightly by means of the ice breaking cylinders and keep the ramp in this position by operating the control time and again in the closing mode to press the ramp against the ice breaking cylinders as it would otherwise more open/close due to the very hard pitching of the ferry. The slight opening of the starboard stern ramp allowed the excessive water on the car deck, continuously penetrating through the unclosed bow ramp from the water filled visor, to run out at the stern. This worked, of course, only as long as the ferry had a stern trim and a starboard list. Both was the case until about 23.30 hours when the visor was more or less full and the trim changed to down by head. For further details see Chapter 31 - The Casualty Scenario. The pictures below show the stern ramp arrangements in port.

It has to be assumed that the starboard stern ramp was completely unlocked as it otherwise could not be slightly open and that the reason for this slightly open condition is the almost upside down condition of the wreck. It has further to be assumed that the stern ramp has been much more open during casualty sequence-of-events because latest after the shut-down of the auxiliary diesels the hydraulic pumps stopped since not being connected to the emergency generator. This means that subsequently the starboard stern ramp slowly opened completely or more or less completely while the ferry heeled more and more to starboard which led to massive water ingress onto the car deck and through the big lift opening at the aft end of the centre casing also into the large provision area in the aft of deck 1 and so on. This is most probably the explanation for the ferry sinking by the stern.