In January 1994 the ESTONIA was fitted with stabilisers of make Brown Brothers which had allegedly been in operation at the time of the casualty. According to 3rd engineer Margus Treu, the fins should retract automatically at speeds below 4 kn, therefore he does not believe that survivors could have seen the port stabiliser still out when the vessel was already almost on the side - see Enclosure 21.2.3.271 - Protocol of Landvetter meeting on 31.03.95.
In all probability Margus Treu is right because only after proper questioning of the survivors Pierre Thiger, Tony Spuhl and Mats Hillerström did it turn out that what they believed to have been the stabiliser was much too much forward to assume it could have been the stabiliser. They saw something big, partly white, partly dark, vertically bigger than transverse, which was moving in/out and/or up/down, very far forward, almost at the bow. They saw it still when the vessel was on the side already. The statement of Pierre Thiger taken on 08.10.99 is attached as Enclosure 29.6.414 and the statement of Tony Spuhl taken on 10.10.99 is attached as Enclosure 29.6.415. The statement of Mats Hillerström is not yet available. The actual stabiliser, however, is installed in a pocket behind the heeling tank on 0-dek level, i.e. about midships. When the witnesses were informed accordingly they categorically denied having seen anything moving in this area. This leads to the conclusion that the survivors had seen the visor, then still hanging on the bow ramp with the bottom attached to the forepeak deck and ice- knife of the bulbous bow.
This leaves the trainee mate Einar Kukk who has stated - see Enclosure 21.2.1.251 - that the stern was down to the stabiliser fin level. But he did not say that the fin was out. Therefore, it has to be assumed that the survivors actually meant the visor when they mentioned the stabiliser during the last stage before leaving the vessel.
In any event the port stabiliser fin was found to be in its pocket during the ROV inspection on 09/10.10.94 - see the images below. 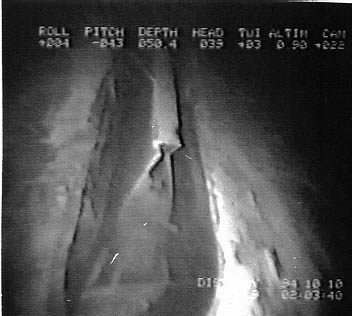 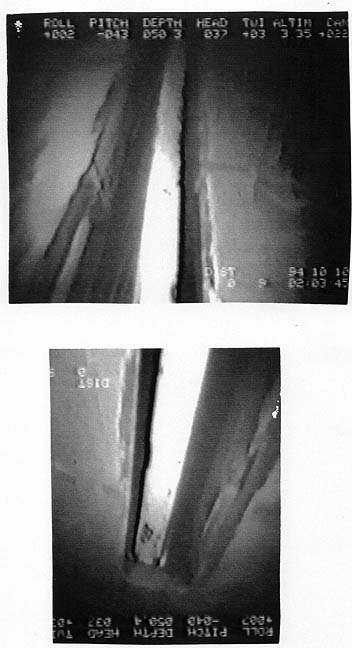 The starboard stabiliser is not visible on the available footage - although the area was accessible and frequently inspected by ROVs and divers - because the respective parts in the available video films were deleted.
The only mention of the starboard stabiliser is made in the Video Tape Log concerning Video No. RW/SEMiI/EST/R/94/001 - General Subject: Mudline Depth Survey by ROV UF0316 - on 04.12.94 - the mudline video - where it is stated:

»51.58 - Follow curve of hull at forward of stabiliser 1 mtr gap from hull to M/L (mudline) straight through.«

Due to the stated depth of 80.7 m before and 81.8 m after the above entry, it has to be concluded that it was the deep starboard side because above the port stabiliser there is only about 50 m of water.

If the stabiliser should be there in its pocket, why did the JAIC then censor the video? Probably it is not there because there have been and still are continuous rumours that the starboard stabiliser had not been installed properly in January 1994 - see Subchapter 12.5.5 - and ever since did malfunction from time to time and consequently might have broken off on the night of the casualty due to a too weak construction. In this connection the statement of the passenger from the 1st deck, Bengt Nilsson, recently taken in Stockholm - see Enclosure 29.6.416 - is of relevance, because he explains the metallic crack-ing/breaking noises heard by him when still lying in his bed as having come exactly from the direction where the starboard stabiliser fin had been installed. This indicates that the fin could have broken off.

Alternatively the stabiliser fin could have broken off by the object sliding against the vessel's starboard side by which the scraping noises were caused. The noise scenario for Bengt Nilsson would have been the same. Therefore the video footage showing the ROV inspection of the sea bottom was analysed and the following two images were found which could show parts of the stabiliser fin. 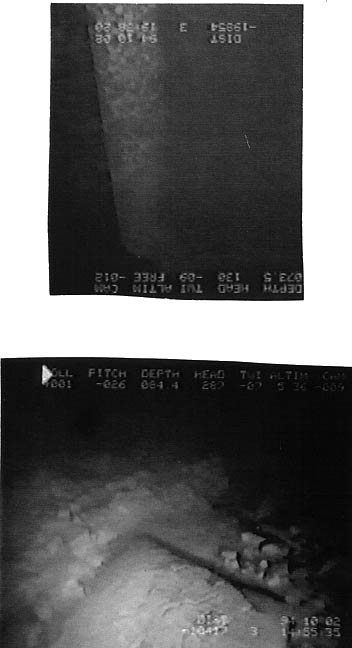 The following image is a single frame from a cut tape which vaguely shows something long on the seabed which the Finnish Commission did not want the public to see in detail. 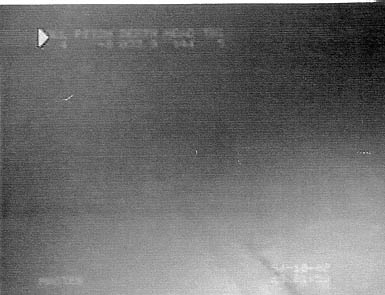 In summary it has to be concluded that the port stabiliser in all probability moved into its pocket when the speed dropped below 4 kn which had been the case already before the big heel. It has further to be concluded that the object seen by some of the survivors far forward on the port side, which was moving in/out or up/down, was most likely the visor. These observations were still being made when the vessel was already on her side, i.e. at 01.30 hours or later.

As to the starboard stabiliser there are strong indications that it broke off or was broken off and is resting on the sea bottom now. In both cases a substantial water ingress into the engine room - at least 2 watertight compart-ments were affected - would have been the result for which there are also indications, because Henrik Sillaste has testified that the bilge pumps were running and Margus Treu has stated they were trying to pump water out of the ship. As it is not possible to pump water from the car deck they can only have pumped from 1st deck and 0-deck.