29.5
The Shell Plating and Bottom Plating

This particular area of the wreck above the mudline was carefully examined by divers and ROV because a surprisingly big part was accessible, much more than it could be assumed with a vessel lying on her starboard side. The reason is, as demonstrated by the drawings below taken from the Smit-Tak Report - Enclosure 27.410 - that the superstructure was buried into the sea bottom. Therefore the wreck had a list of about 120° with the bottom up and a substantial part of the starboard hull side was accessible above the bilge strake partly up to car deck level.

This means that over the whole length of the wreck the starboard shell plating in way of the 0-deck is accessible which includes the heeling tank and stabiliser pocket areas. The same is true for the 1st deck which is accessible in most parts while the car deck can only be reached in way of section D, which is aft of the bridge. The drawing on the next page - also taken from the Smit-Tak Report - Enclosure 27.410 - indicates the section areas A-E.

Incidentally the area at D - where the car deck is accessible - is most likely not the location where the cement bags on pallets and other cargo were observed. See Subchapter 29.3.

Also accessible is the Starboard Shell Plating in way of 0-deck between Frames 85-120, i.e. the area below the passenger accommodations on the 1st deck with exception of the most forward compartment which is located on top of three initially full freshwater tanks. Further aft there were the following watertight compartments on 0-deck:

2. Compartment:
from port to starboard:

swimming pool with bar, this compartment is connected to the upper decks by lift and to the 1st deck by a spiral staircase

conference rooms with alleyway in front, 1 stairway was leading to upper decks which was probably only accessible for the crew

heavy fuel tanks with walkway around

Note: Both heeling tanks were connected by a cross-flooding valve which could be operated from the bridge, the engine control room and a pump room located in the aft part of the car deck.

Based on the evidence of passengers from the cabins of the 1st, 3rd and 4th compartments, there had been a lot of water on the 1st deck already before the big starboard heel which escaped from 0-deck under pressure in way of the 4th compartment and probably also came up the spiral stairway and the lift casing in the 3rd compartment. - See the statement of Carl-Erik Reintamm attached as Enclosure 21.3.1.289.
As the water coming up from 0-deck to deck 1 had been under pressure - see the statement of Carl Övberg - Enclosure 12.4.2.151 - there must have been a connection to the outside. As the port side of the shell plating is apparently undamaged according to the ROV inspections on 02.10.94 and 09.10.94 it has to be assumed that there must be one or more holes in the starboard side.

Note: The existence of such a hole in way of the sauna and swimming pool compartments has been admitted by two Sjöfartsverket employees independently of each other.

Since the starboard shell plating in way of 0-deck is accessible over the whole length of the wreck - see the 2 drawings on the previous pages - and has been carefully examined by ROV and divers during the mudline surveys, it is certain that respective video material is available. The "official" mudline video is, however, censored, i.e. the relevant parts were deleted - see also the Disengage Report - Enclosure 34.6.434. Nevertheless, careful evaluation of the available mudline video does reveal very substantial damage to the starboard shell plating and bottom plating above and below the bilge keel as demonstrated by the images below. 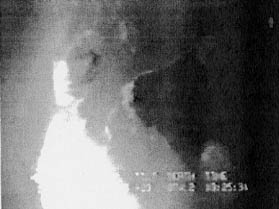 When looking at the images presented here it is difficult to assume that this vessel had been in drydock only 8 months before, because the starboard side is really in a very bad condition, actually much worse as it is possible to demonstrate by images. Very deep indentations between the frames and deep scoring marks, partly not even corroded, are the rule, however, in some particular areas the plating is even holed as e.g. can be seen from the image below. 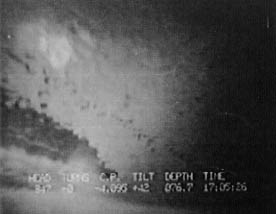 Enhancement by means of special equipment confirmed indeed that the plating is holed - See the enhancement below.

From the damage appearance it has to be concluded that the plate was severely corroded, i.e. the hole was neither caused by an impact of ex- or implosion but by corrosion. This is easily possible if the coating and/or anode protection of a ballast water tank, e.g. a heeling tank, was not in order.

The following two images show an area which is apparently also holed, but not by corrosion because the edges are too sharp.

In any event the ferry ESTONIA departed from Tallinn on her last voyage with one or more starboard ballast water tanks, possibly even the heeling tank, open to the sea.
As stated above - see Chapter 17 - revised stability calculations showed that the vessel must have had about 200 ts additional weight on the starboard side which could not be pumped. The theoretical possibilities of unconfirmed flooding of compartments through holes to the outside was discussed as the reader may remember.
The possibility now turns to a fact. The vessel had holes in her underwater shell plating. The obvious effect on the seaworthiness of the ferry needs not to be discussed. The fact that the JAIC, having worked on the interpretation of those videos, does not mention anything in this regard, is undebatable too.