This most forward part of the vessel has been unusually carefully examined at least three times by ROVs and at least one time by divers.
Numerous deep scoring marks with paint cracked off in way of the ice-knife on top of the bulbous bow and further forward were noted, which most probably were sustained when the forward part of the visor was in contact with these areas.
Thus the bulbous bow and the ice-knife on top had been in contact with the visor and possibly something else which caused a number of scorings and an indentation to these very strong parts of the ferry. Nevertheless, they were examined quite closely by the ROV and divers, and the images below are just a small selection of the material available. They show on picture 1 the tip of the bulbous bow with some minor rubbing marks. Picture 2 shows the top slightly further aft with some scorings and picture 3 shows the top even further aft with the paint in the centre completely gone.

In addition, the image below showing white contact marks on the port lower side approximately 1.5 m aft of the tip of the bulbous bow.

The following image shows white contact marks on the port side of the bulbous bow further aft than the previous one. 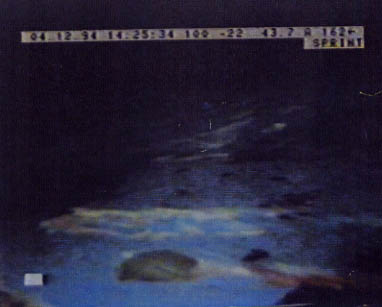