Very little is known about the inside of the car deck except for the observations made when the diver went down (up) the starboard inner bulkhead, inside the ramp towards the car deck. A lot of pallets and dunnage were noted to be piled up to the left of his way, with other debris and what appeared to be parts of the ramp rails mixed between. Behind the debris at least one, probably two big holes in the bulkhead are visible which will be discussed in Chapter 32.

Although the upper part of the ramp opening was considerably damaged indicating that something big had smashed against it, no scoring marks are visible and the area of the inner bulkhead is covered by the above-mentioned debris. It is possible that this damage was caused by the visor - see Chapter 31 - during the casualty sequence-of-events.

The condition of the bow ramp flaps on the car deck side have already been explained in the previous Subchapter 29.2 - The Bow Area - and the big hole noted in the port inner bulkhead below the control panel and adjacent to the port outer ramp hinge will be discussed in Chapter 32. In spite of various attempts and although the supervisor frequently said so, the ROV was apparently never inside the car deck according to the evaluation of Disengage - see Disengage Report Subchapter 34.6 - and if the ROV actually should have been inside the car deck it definitely did not enter it via the opening at the bow ramp but then it must have been through such a big hole in the starboard shell plating that the edges were not visible while the ROV moved through. This is doubtful but cannot be excluded because the relevant part of the Sprint ROV video tape B40b has been cut several times. - See Subchapter 34.6. in any event on the uncensored part of this tape cement bags on pallets shrinked by plastic foil and other cargo parts, however no truck or trailers, can bee seen which then has to be on the seabed.

This immediately raises the question of how they got there because it is most unlikely that this cargo originates from another vessel as it looks rather new and unaffected by sediments. It can also be excluded that the cargo fell out of the open bow ramp when the vessel was upside down because she was then down by the stern and it is physically impossible for pallets to move off some truck or trailer on to the car deck and then ahead on to the bow ramp and then to fall off the bow ramp. This leaves a sufficiently big hole in the shell plating in way of the forward starboard side of the car deck which indeed cannot be excluded and is - as a matter of fact - the only possibility. As the observations described above were made by the ROV on 3 December 1994, i.e. more than 2 months after the casualty, there are two possibilities, viz.:

(a) heavy objects from inside the car deck crashed against the shell plating and broke through it either during the big heel, which is unlikely, and/or subsequently
(b) a hole was blown or flame-cut from the outside into the car deck to get access after the casualty.

In order to be able to explain further observations on the car deck by survivors also the fire-fighting system installed here - a sprinkler system called Drencher system - has to be explained as follows:

On the car deck there were also heat-sensors installed, which activated control lights on the bridge indicating the particular area. By pushing a respective bottom the watch officer started the fire pump and activated one or more quick-opening valves of the sprinkler system installed underneath the car deck ceiling, i.e. below the 4th deck. This sprinkler fire protection system was spraying water out of nozzles under high pressure all over the area and the fire pump was continuously pumping water into the system. This sprinkler pump could also be activated from the ECR and from the sprinkler room (B-deck level in the aft part of the centre casing). It was connected to the emergency generator. This means that this pump has been running until the vessel was more or less on the side.

In this connection the observation of passenger Juuse Veljo is of importance who testified among others "On my way down the port side in about the middle of the ship I reached the fender bar and heard the noise of pumps. While I was still sitting on the edge the light started to blink." - See his statement Enclosure 20.245.

Note: The emergency generator then still running was supplying power to three pumps, viz.: the bilge pump, the fire pump and the sprinkler pump.

It is possible that the sprinkler pump was then still running together with the bilge pump, which according to Margus Treu, Henrik Sillaste and Hannes Kadak was also running already since or even before the big heel.

Furthermore there are some observations/indications which could point to a fire in the forward part of the car deck. These are

(1) the statement of the watch engineer Margus Treu that a jet of water hit the lens of the video camera transferring pictures from the partly open bow ramp to the monitor in the engine control room (ECR) where he was watching - see his statement dated 29.09.94 Turku - Enclosure 21.2.3.263. Treu believed that this water jet came from the partly open bow ramp, which however is not possible because the camera is fitted at the forward part of the centre casing underneath the ceiling. The distance to the bow ramp is 25 m and the height above car deck is about 5 m - see the pictures below taken on board the near-sister DIANA II where the camera was installed as on ESTONIA. 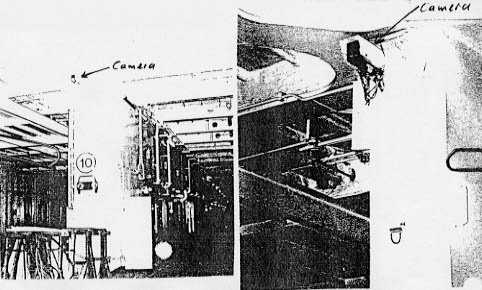 It can thus be excluded that water penetrating the bow ramp at that relatively early stage could have reached the camera in such high position as much as the car deck between bow ramp and camera was full of trucks and cars.

It is much more likely that the camera lens was hit by a jet of water from the sprinkler installation which had been activated manually in the forward part of the car deck.

(2) It has been explained in the previous Subchapter 29.2 - The Bow Area - that the lower part of the ramp in way of the two flaps in the middle was noted to be reddish/brown with the flaps being bent and distorted and possible damage to car deck plating.

(3) The passenger Bengt Nilsson has testified that he saw white powder and foam inside the centre casing on car deck level next to the 4th car deck door from forward on starboard side. He rushed past this door on his way up when the vessel heeled abruptly to starboard and he had to hold with his hands against the wall when he noted the above. It was so fresh that the foam was still running down the wall.

(4) The coded fire alarm for the crew "Mr. Skylight to No. 1 and 2" was heard from the loud speakers, though only after the big heel when there was already full panic. It meant that Fire Group No. 1 had to assemble below the starboard bridge wing on deck 8 and Fire Group No. 2 had to assemble on the car deck.

(6) It is certain that the crew knows much more about what happened on the car deck, but remain silent, so far. It has to be assumed that this knowledge relates to the circumstances described in Chapter 32 - Unexplained Damage.