This subchapter contains observations of survivors after they had reached the open deck 7 and/or were on the outside hull and/or in the water/liferaft/lifeboat which might be of relevance for the casualty scenario and/or the causes for the sinking.

- He walked down the side below the bridge and diagonally further towards the fenderbar. Then he saw the other ferries far away. The port side was the lee side. 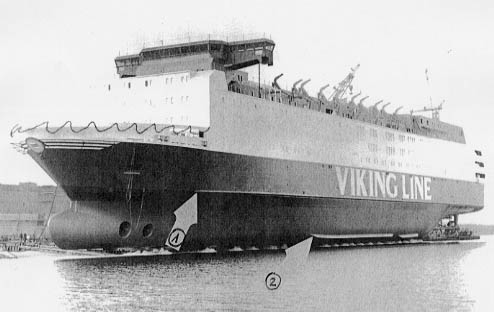 - When he was at the forward part of the fenderbar he saw something like a fin sticking out of the hull, dark like the bottom, maybe 1.5 m or less, looking like a propeller blade of a plane. It was not moving.

- He tried to reach it but was washed into the sea by a wave.

Note: The photo which Mikael Öun made of the Estonian boy sitting on the vessel's bilge strake probably shows this sticking out part.

PT: There were maybe up to 100 persons at the most who were on the ship's outside, of which about 50 or half of them crawled up to the keel or the bottom and later more forward as she began to go down aft. And I knew that gradually she would sink. And now the stern went down first. And she raised up forward, and therefore I did not want to climb up more, and I tried to stop others, or to calm down others who were blindly rushing towards the highest spot where a crowd of about 50 people had gathered, exactly above a fin stabilizer which stood and worked to and fro for the whole time.

OF: There was a fin stabilizer out?

OF: You could see this also?

PT: Yes, I could see it on the port side. It stood and went to and fro like this all the time, very fast. About 50 percent of the people had gathered up there. And she began to go down aft, and I had come (down) to about half of the depth (of the ship).

Note: When Pierre Thiger was shown the general arrangement plan, he indicated his way down the port side approximately below the port bridge wing and emphasized that what he thought to have been the stabilizer had been to his right, i.e. to forward. After he had seen on the drawing that the stabilizer was fitted about midships above the bilge strake, i.e. to his left he was certain that it could not have been the stabilizer he had seen to his right far forward but something else which was moving and which, according to his statement, had been vertically bigger than horizontally.

- He crawled down the port side below the bridge and saw a big object to his right, i.e. towards forward, which was big and moving in/out.

- He thought that it was the stabilizer.

- He managed to get into a raft.

- The vessel turned more than 90° and the bridge, deck 8, deck 7, etc. disappeared while his raft was still alongside the hull where the bridge had been before.

Note: When Tony Spuhl was shown the actual location of the stabilizer on the general arrangement plan, he admitted that it must have been some thing else what he saw forward at the bow, probably the visor then still connected to the vessel.

At 01.30/32 hours the ferry was on her side according to the statements of many survivors, e.g. Lars-Olof Lamke who was then washed from board where-by the glass of his wristwatch was broken and his watch stopped at that time, and Einar Kukk, who looked at his watch before going into the water.
The vessel was then only slightly trimmed to the stern. The funnel smashed several times onto the waves and then disappeared while the vessel turned further to starboard and the stern sank deep down. Finally the vessel was completely upside down with the stern area resting aground already and the bow rising high, the highest point being the bulbous bow. The drifting stopped and the bow was turned, towards East by the westerly storm, while it sank stepwise deeper in the waves.
It was in this position that several crew members and passengers being in liferafts in the area of the foreship noted that the visor was no more in place, but that the bow ramp was visible in closed or almost closed condition. The bow sank slowly down and the last visible part of the vessel was the bulbous bow looking like a whale with the waves washing over it.
At 01.53 hours the echo of ESTONIA disappeared from the radar screens of the MARIELLA.

The biggest shipping catastrophe in peace time in Europe had become a fact.