Only in the forward third of this deck there were passenger cabins, the luxury cabins equipped with mobile phones. In the larger part, there were the A-la-carte Restaurants SeaSide and Poseidon, the Baltic Bar and the Casino. Also this area had been changed considerably in comparison to the newbuilding layout. The above drawing shows the latest condition. Before referring to the testimony of passengers and crew members having been on this deck, the summary of the statement of Mats Hillerström shall be outlined. He was actually sharing cabin 1026 below car deck with 3 others but felt unwell and scared and thus moved up to the aft and open part of deck 6 already after midnight, ship's time, ca. 00.30 hours! See also Chapter 20.

With reference to the photo on the next page here are his observations in short:

»He stayed in a sheltered place on starboard side best protected against the storm and heard nothing but the noises of the storm. The air was full of spray. At some time he saw a large vessel on starboard side apparently on same course and speed. Also on starboard side, but far away and astern, there was another vessel which was slower because the distance appeared to increase. He looked at his watch and it was 01.05 hours. Suddenly and without any previous indication the vessel heeled to starboard. He saw the tables and chairs inside the restaurant moving to starboard. Within a very short time the vessel took such a list that he could not walk anymore on the deck, but had to pull himself along the railing on the aft part to the higher port side. 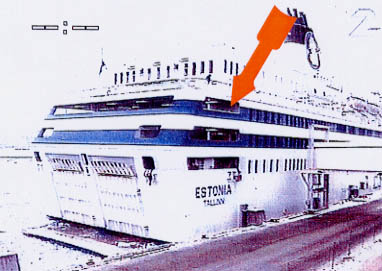 When he had reached the port side, he looked over the side and got the impression that the vessel had reduced speed and was turning to port.

Before and after the starboard heel:

a.) Before the starboard heel.

b.) After the initial starboard heel.

d.) The righting up after the starboard heel.

as to a.) Before the starboard heel.

(1) One vessel on starboard side abeam, the other one starboard astern.

(2) Something was beating heavily against the vessel.

(5) Indefinable shocks and noises which were repeated regularly 4-5 times "tong-tong-tong-tong", which came from forward and below and were not created by wave impact.

as to b.) After the initial starboard heel.

(1) Ca. 2-3 minutes after heel something far forward out of the water, which looked like a fin.

(4) Funnel was pointing in the direction where the wind came from.

as to c.) Time of starboard heel.

(2) Marianne Ehn: something was beating heavily against the vessel - asked husband for the time and got the reply: 00.00 hours (Swedish time) - 01.00 hours ship's time, shortly thereafter vessel was diving into a wave trough - heavy bang - heeled to starboard - engines stopped.

(3) Vassili Vorodin: ca. 01.00 hours he felt that the vessel heeled to starboard.

(4) Lars-Olof Lamke: was woken up by his wife, it was ca. 01.00 hours, immediately thereafter vessel heeled to starboard.

as to d.) The righting up after the starboard heel.

(2) Vessel heeled wide to starboard, righted not fully and continued to heel to starboard.

(1) Lamke was washed overboard when the vessel was on her side, thereby his arm with the wristwatch was smashed against a rail and the watch stopped at 01.31 hours.

In summary of items a.) - e.) the following can be concluded:

(a) The noise scenario was partly different, partly more or less the same as heard on the lower decks which can probably be explained by the longer distance from deck 6 to the casualty areas.

(b) The observations stated under (1) and (2) were made by passengers Mats Hillerström and Christer Eklöf. Hillerström was out on deck in the aft part of deck 6, starboard, when the big heel occurred. He saw the vessel still turning to port when he looked over the port side which was confirmed by Christer Ecklöf when he reached the outside of deck 7 only two or three minutes after the heel. It was not confirmed by Per-Erik Ehrnsten who reached the open deck 7 probably four to five minute after the heel.

(c) The time for the big heel was about 01.00 hours as confirmed by most of the survivors who have stated this time.

(d) As on the other decks the righting up after the big heel has been reported by only few survivors. 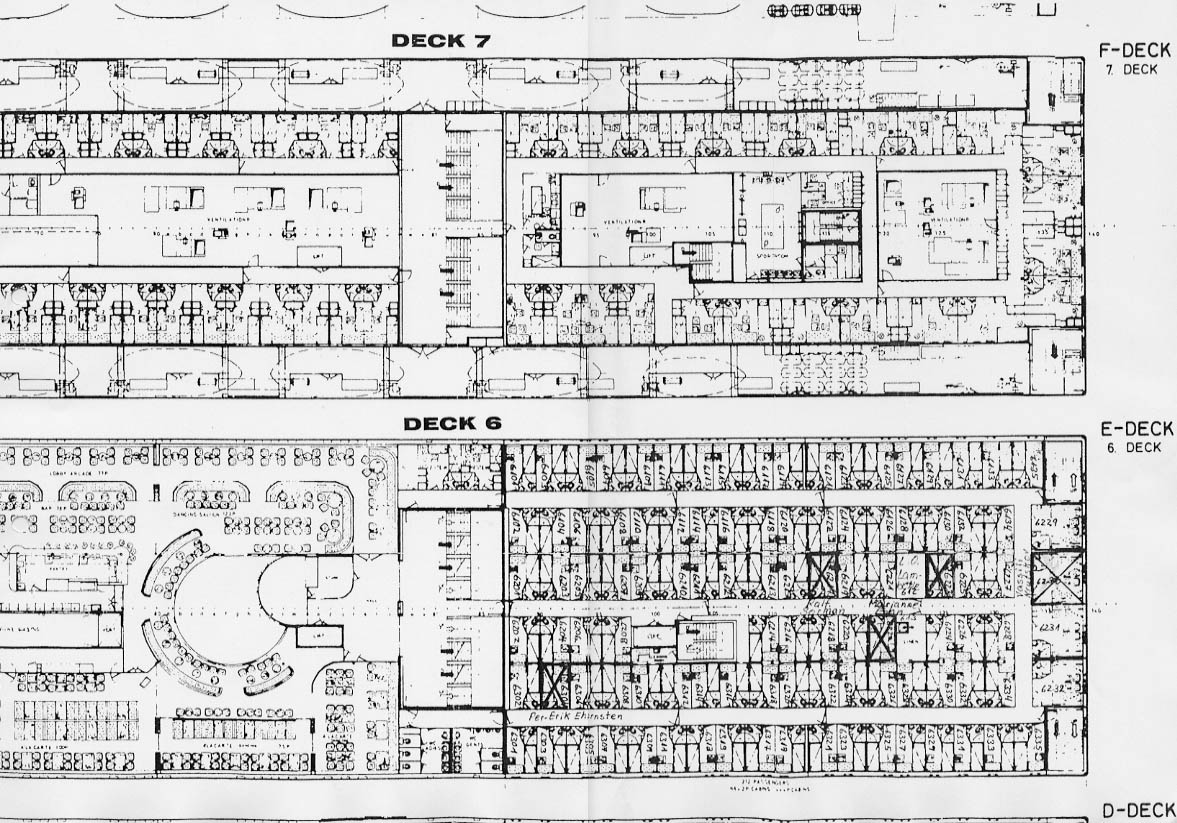