»I have seen that the flaps in front of the car deck, which close the gap between bow ramp and car deck when the ramp is open, were missing at port side when the ramp was closed. The flaps were then lying loose at the side. After the bow ramp was open I have seen crew members pulling the flaps across the gap by means of hooks. I have sometimes noted that some of the upper flaps of the bow ramp were missing, but were back in place later.
There was always a garbage container standing in front of the centre casing which was never secured.
I have been on the car deck at sea several times. The car deck doors were never locked, but I was chased away by crew members sometimes, i.e. I was not permitted to enter the car deck where some activities were going on which I could not identify.
Trucks and personal cars were never secured, only the trailers were lashed.« 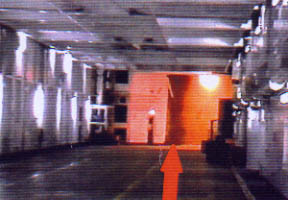 »The car deck doors were not locked at sea (although it was said by the crew that they were), thus I was able to go down on to the car deck at sea, also at night (although this was strictly forbidden). I did this frequently to take something to my car, or to take something out, or just to check the car in bad weather to make sure that nothing was touching it. The car was sometimes secured by wooden wedges being put in front and behind the wheels, the trucks were sometimes secured by belts, the trailers very often not at all.
In front of the centre casing there were always standing one or two garbage containers into which the crew put empty bottles, cartons and the like. In addition, I noticed that these containers were also sometimes standing at port side and at starboard side in the aft part of the car deck. I have drawn the position into a sketch of the car deck (attached as Enclosure 12.4.5.163). As far as I remember these containers were never secured and very often caused concern to me when my car was standing close to them. The port one is visible on picture 1, whereby arrow 2 is pointing to it.

When I was down on the car deck at night, I have several times seen the flashing light of welding being performed in the forward part of the car deck near or at the bow ramp. When I was standing with my car close behind the bow ramp I could look into the open control panel located at the port side inner bulkhead behind the bow ramp. I remember that at least during the last months before the catastrophe there were only 1 (one) green and 1 (one) red light visible on the panel. The operator was always an ordinary crew member with boiler suit and walkie-talkie.«

The fax with office translation is attached as Enclosure 12.4.5.165.

»I had frequently been on the forward part of the 8th deck upon departure from Stockholm and do remember having quite often seen the visor open.« (See photo below.) 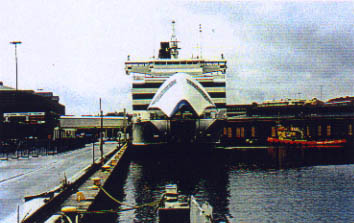