The picture below shows ESTONIA at her berth in Tallinn with open visor and closed bow ramp. The arrow no. 1 points to the oil covered lower part of bow ramp which demonstrates the height of the water level with hydraulic oil floating on top inside of the visor when the vessel was at sea in calm weather. Arrow no. 2 points to the bow ramp hinges which are on car deck level. 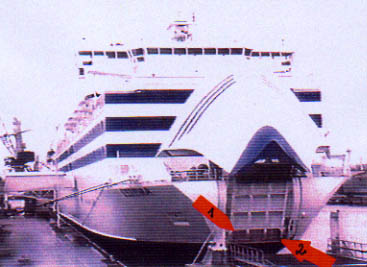 Note: This was also observed by the watchman on the Sandhamn watch tower reported by visitors to the Second Exhibition of the 'German Group of Experts' in Stockholm.